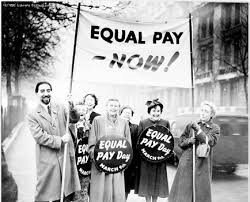 The Equal Pay Act of 1963 is a United States Federal Law amending the Fair Labor Standards Act, aimed at abolishing wage disparity based on sex (see gender pay gap). It was signed into law on June 10, 1963, by John F. Kennedy as part of his New Frontier Program.

The law provides (in part) that:

No employer having employees subject to any provisions of this section [section 206 of title 29 of the United States Code] shall discriminate, within any establishment in which such employees are employed, between employees on the basis of sex by paying wages to employees in such establishment at a rate less than the rate at which he pays wages to employees of the opposite sex in such establishment for equal work on jobs[,] the performance of which requires equal skill effort, and responsibility and which are performed under similar working conditions, except where such payment is made pursuant to (i) a seniority system; (ii) a merit system; (iii) a system which measures earnings by quantity or quality of production; or (iv) a differential based on any other factor other than sex