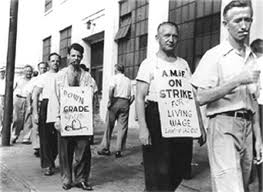 The Norris-LaGuardia Act, passed in 1932, during the last year of

the Hoover Administration, was the first in a series of laws passed by

labor unions to organize and strike, and to use other forms of

economic leverage in dealings with management.

so-called “yellow dog” contracts or agreements (under which workers

In addition, it barred Federal courts from issuing restraining orders

or injunctions against activities by labor unions and individuals,

(*) joining or organizing a union, or assembling for union purposes;

(*) striking or refusing to work, or advising others to strike or

(*) Publicizing acts of a Labor dispute; and

(*) providing lawful legal aid to persons participating in a labor