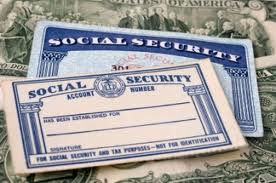 The Social Security Act was drafted during Franklin Delano Roosevelt’s first term by the President’s Committee on Economic Security, under Francis Perkins, and passed by Congress as part of the Second New Deal. The act was an attempt to limit what was seen as dangers in the modern American life, including old age, poverty, unemployment, and the burdens of widows and fatherless children. By signing this act on August 14, 1935, President Roosevelt became the first president to advocate federal assistance for the elderly.[2]

The Act provided benefits to retirees and the unemployed, and a lump-sum benefit at death. Payments to current retirees are financed by a payroll tax on current workers’ wages, half directly as a payroll tax and half paid by the employer. The act also gave money to states to provide assistance to aged individuals (Title I), for unemployment insurance (Title III), Aid to Families with Dependent Children (Title IV), Maternal and Child Welfare (Title V), public health services (Title VI), and the blind (Title X).[3] The practical effect of this proposal was that the President would get to appoint six new Justices to the Supreme Court (and 44 judges to lower federal courts), thus instantly tipping the political balance on the Court dramatically in his favor. The debate on this proposal lasted over six months. Beginning with a set of decisions in March, April, and May, 1937 (including the Social Security Act cases), the Court would sustain a series of New Deal legislation[4] Chief Justice Charles Evan Hughes played a leading role in defeating the court-packing by rushing these pieces of New Deal legislation through and ensuring that the court’s majority would uphold it