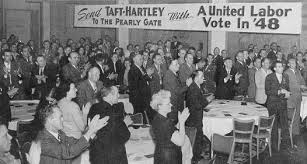 the first major modification of the National Labor Relations Act was

enacted. In 1947, the Labor-Management Relations Act — also known as

the Taft-Hartley Act, after its two sponsors, Sen. Robert A. Taft

Congress, Vetoed by President Truman (on the basis that it was

anti-Labor), and then reapproved over his veto. This comprehensive

(*) excluded supervisory employees from coverage of the

rights to join unions, bargain collectively, and strike [Gee, thanks!

to employers. The Act also added a list of unfair labor practices

forbidden to unions. These included:

(*) restraint or coercion of workers exercising their rights to

bargain through representatives of their choosing;

in discussions with unions;

(*) refusal of unions to bargain collectively;

(*) barring a worker from employment because he had been denied union

membership for any reason except non-payment of dues;

The Taft-Hartley Act included a number of other provisions. These included:

(*) authorization of suits against unions for violations of their

(*) relaxation of the Norris-LaGuardia Act to permit injunctions

for any party seeking to cancel an existing collective bargaining

(*) a requirement that unions desiring status under the law and

documents with the U.S. Department of Labor;

(*) the abolition of the U.S. Conciliation Service and establishment

of the Federal Mediation and Conciliation Service;

(*) a prohibition against corporate or union contributions or

expenditures with respect to elections to any Federal office;

(*) a reorganization of the NLRB and a limitation on its power;

(*) a prohibition on strikes against the government;

(*) the banning of various types of employer payments to union