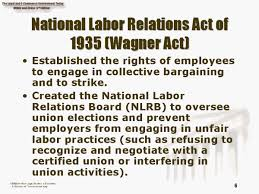 the Wagner Act, after its sponsor, Sen. Robert F. Wagner (NY-D). This

of the NRA as well as a number of additions.

The NLRA was applicable to all firms and employees in activities

affecting interstate commerce with the exception of agricultural

laborers, government employees, and those persons subject to the

and join labor movements, to choose representatives and bargain

collectively, and to strike.

of three members appointed by the President, was established by the

Act as an independent Federal agency. The NLRB was given power to

determine whether a union should be certified to represent particular

groups of employees, using such methods as it deemed suitable to reach

such a determination, including the holding of a representation

five categories of unfair labor practices. Violation of this

a union or employees. After investigation, the NLRB could order the

cessation of such practices, reinstatement of a person fired for union

activities, the provision of back pay, restoration of seniority,

benefits, etc. An NLRB order issued in response to an unfair labor

practice complaint was made enforceable by the Federal courts.

Among those unfair labor practices forbidden by the Act were:

1) Dominating or otherwise interfering with formation of a labor

union, including the provision of any financial or other support.

2)  Interfering with or restraining employees engaged in

the exercise of their rights to organize and bargain

3)  Imposing any special conditions of employment which tended either

to encourage or discourage union membership. The law stated,

however, that this provision should be construed to prohibit union

contracts requiring union membership as a condition of employment

in a company — a provision which, in effect, permitted the closed

and union shops. (In the former, only pre-existing members of the

union could be hired, in the latter. New employees were required

to join the union.)

4)  Discharging or discriminating against an employee because he had

given testimony or filed charges under

5) Refusing to bargain collectively with unions representing a

The NLRA included no provisions defining or prohibiting as unfair

any labor practices by unions. The Act served to spur growth of U.S.

2?  percent of the nonagricultural workforce in the U.S.