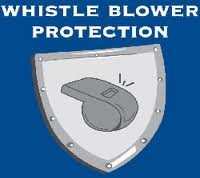 Whistleblowing means disclosing information that you reasonably believe is  evidence of a violation of any law, rule, or regulation, or gross  mismanagement, a gross waste of funds, an abuse of authority, or a substantial  and specific danger to public health or safety.

On July 9, 1989, the Whistleblower Protection Act of 1989 (Public Law 101-12) became effective. Congress enacted this law to strengthen protections for Federal employees, former employees, and applicants for employment who claim that they have been subjected to personnel actions because they made whistleblowing disclosures. The 103rd Congress further expanded whistleblower protections by enacting Public Law 103-424, which became effective October 29, 1994, making additional personnel actions subject to coverage and extending whistleblower protections to employees of Government corporations and to employees in the Veterans Health Administration.